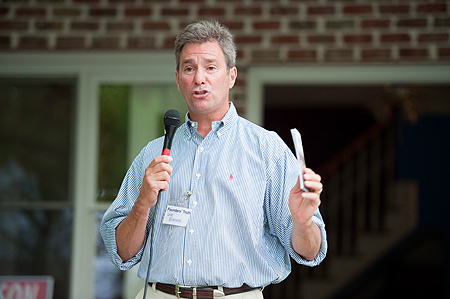 “I enthusiastically endorse Greg Brannon for U.S. Senate because he’s a true constitutional conservative who will join me in fighting against business as usual in Washington.”

“Americans are looking for leaders who will honor their oath of office by fighting to ‘protect and defend’ the Constitution and Greg is the clear choice for conservatives in North Carolina.“

“The American people don’t want more politicians in the U.S. Senate who will continue to expand the size of government. We need Greg in the Senate to provide vital reinforcements to help reverse out-of-control spending, restore constitutional limitations on our federal government, and fight back against President Obama’s agenda.”

“And as Ted Cruz, Mike Lee and I showed clearly in our campaigns, when you run on principle and excite the grass-roots Republicans, and Independents and even Democrats hungry for a change, you win. That’s why I support Greg Brannon, and expect him to be North Carolina’s next Senator,”  concluded Senator Paul.

Rand: @BarackObama sent 7 security guards to #WWIIMemorial this AM to keep out our vets. Sadly, that is 2 more than were present in Benghazi.

← John Williams: Very Serious Trouble in this Next Year – Weaker Dollar and Hyperinflation
China May Seize Control Of Entire US Financial System →