Rohit Savant of Seeking Alpha today wrote that he believes that gold prices are vulnerable to sharp moves over the next few days as the September 18th FOMC meeting will be the primary driving factor.

Gold prices are vulnerable to sharp moves in either direction over the next few days. The primary driver of prices is expected to be the conclusion of the Federal Open Market Committee (FOMC) meeting on 18 September. The Fed will announce at the end of the meeting, among other things, its plans with regards to its $85 billion monthly bond purchases.

It is now being widely expected in the market that the Fed will announce a reduction in the size of its monthly bond purchases by anywhere between $5 billion to $15 billion.

He believes the price of gold has been dropping in anticipation of tapering by the Fed and the reduced threat of war in Syria. He also sees the potential for gold prices to drop below $1300 before the FOMC meeting.

Based on the popular belief that the Fed will reduce its monthly bond purchases, gold prices already have declined 4.9% from a settlement price of $1,386.40 on 9 September to $1,317.80 on 16 September. Reduced concerns about a U.S. military attack on Syria additionally weighed on gold prices over the past week. Prices could slip lower before the Fed’s 18 September announcement, possibly toward $1,280. A decline in prices below this level should not be ruled out, however, with the next support for prices positioned at $1,260.

Rohit points out that the Sept. 18th announcement by the Fed is not necessarily a negative for the price of gold.

While many observers assume any announcement by the Fed that it is reducing its bond purchasing program would be negative for gold, this may not be the case. To some extent the idea of the Fed reducing the rate of its bond purchases already is reflected in the sharply lower prices over the past week. If a reduction in bond purchases is announced that matches market expectations, gold prices actually could rise, as the market’s expectations would be met but not exceeded. The stock market, which has been going from strength to strength in recent weeks, is much more vulnerable to a major decline on such a Fed announcement; a weaker stock market in turn could benefit gold, as some of the money that exits the stock market could at least temporarily enter the gold market.

He also believes that June bottom in the price of gold could be tested if the announcement consists of a larger-than-expected reduction in bond purchases, though he downplays this possibility.

You can read the entire article at seekingalpha.com 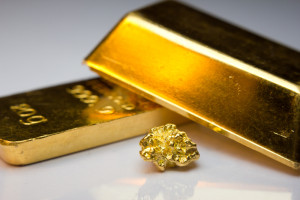