Fed could up QE to $1 trillion a month: Marc Faber

Marc Faber, publisher of The Gloom, Boom & Doom Report, told CNBC on Monday that investors are asking the wrong question about when the Federal Reserve will taper its massive bond-buying program. They should be asking when the central bank will be increasing it, he argued.

“The question is not tapering. The question is at what point will they increase the asset purchases to say $150 [billion] , $200 [billion], a trillion dollars a month,” Faber said in a “Squawk Box” interview.

The Fed—which is currently buying $85 billion worth of bonds every month—will hold its October meeting next week to deliberate the future of its asset purchases known as quantitative easing.

Faber has been predicting so-called “QE infinity” because “every government program that is introduced under urgency and as a temporary measure is always permanent.” He also said, “The Fed has boxed itself into a position where there is no exit strategy.”

The continuation of Fed bond-buying has helped support stocks, and the Dow Jones Industrial Average and S&P 500 Index are coming off two straight weeks of gains, highlighted by record highs for the S&P.

The world is in ‘gigantic asset bubble’: Faber
Marc Faber, The Gloom, Boom & Doom Report, shares his views on how inflation has impacted global wealth.

While there may be little inflation in the U.S., Faber said there’s been incredible asset inflation. “We are the bubble. We have a colossal asset bubble in the world [and] a leverage or a debt bubble.”

Back in April 2012, Faber said the world will face “massive wealth destruction” in which “well to-do people will lose up to 50 percent of their total wealth.”

In Monday’s “Squawk” appearance, he said that could still happen but possibly from higher levels because of the “asset bubble” caused by the Fed.

“One day this asset inflation will lead to a deflationary collapse one way or the other. We don’t know yet what will cause it,” he said. 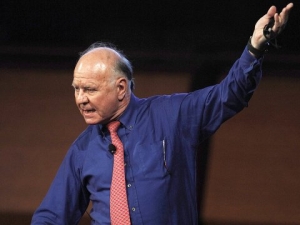 Faber on gold: “We have a strong rally form the lows at 1180 to over 1400 and now we are backing off. I think between around 1200 and 1250 it is getting into buying range. The sentiment about gold is very negative, but if you look at everything considered – the monetization of debt, the…

END_OF_DOCUMENT_TOKEN_TO_BE_REPLACED

Published On: Sun, Sep 29th, 2013 World News | By Robert Herriman Russia and Kazakhstan expanded their gold reserves for an 11th straight month in August as they added 12.7 metric tons, according to a recent Bloomberg report. Image/CIA Russia’s holdings of the precious metal has topped 1,000 tons at 1,015.5 tons, according to the report. In addition, Kazakhstan’s reserves rose 2.5 tons to 134.5 tons…

END_OF_DOCUMENT_TOKEN_TO_BE_REPLACED 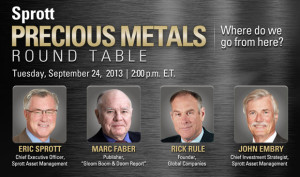 END_OF_DOCUMENT_TOKEN_TO_BE_REPLACED

Faber: We Have A Huge Bull Market In Gold, Gold And Silver Are Relatively Inexpensive

END_OF_DOCUMENT_TOKEN_TO_BE_REPLACED

(Video) Marc Faber – We Are In `QE Unlimited’