China May Seize Control Of Entire US Financial System 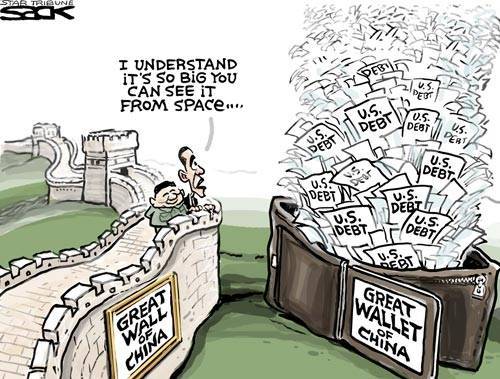 Today acclaimed money manager Stephen Leeb stunned King World News when he warned “if the Chinese were ready right now to seize power, they could probably take control of our financial system today.”  Leeb also discussed the frightening implications of this for the United States as well as where the US is headed from here.

Leeb:  “I am focused on the chaos in Washington.  We need a situation where the politicians form some sort of cohesive unit that would suggest they are interested in growth and the well-being of the American people, but that doesn’t exist.  Frankly, I’m angry.  I’m an American.  I have kids that are growing up here, and as I said, I’m really, really angry about what is transpiring….

“I see what is happening as the beginning of the end.  I also continue to see what is taking place as a tremendous gift to China.  We are just giving power to China — just handing it over to them.  It’s as if we lost a big poker game to China, or we are in the process of losing.

Yes, the US will probably pass an extension on the debt ceiling, but we are like blind men right now and we are just taking another step toward the cliff.  The only reason we are able to continue with business as usual is because there is nothing better than the dollar right now that people or countries can easily turn to as a currency.

There is gold, and gold is much, much better than the dollar.  The more I look at the manipulation that’s going on in the markets, and I’ve never been one to believe in manipulation, but how can you avoid it when you see major financial institutions being accused of manipulating trillion dollar currency markets.

Stunning – China To Accumulate Another 5,000 Tons Of Gold

China To Unleash The Worst Nightmare For The US

Despite Correction, Silver Is Set Up To Super-Surge To $110

9 Signs That China Is Making A Move Against The U.S. Dollar

David Stockman – This Financial Collapse Will Be Catastrophic