By: Katie Holliday | Writer for CNBC.com

The Federal Reserve’s shocking decision not to taper, despite broad expectations for a $10-20 billion reduction of its monthly asset purchases, has reignited talk of a global currency war.

Risk-on currencies like the Australian dollar, the euro and the British poundsoared in response, while the greenback dropped across the board. Now some analysts say the Fed’s decision could prompt other central banks to devalue their currencies in an attempt to retain a competitive edge.

“We are on the verge [of a currency war]… especially if the Fed does not taper in October or December…” said Boris Schlossberg, MD of BK Asset Management.

(Read more: Where has the talk of currency wars gone?)

The other G10 countries will have to react and the only thing they can do is provide “even more accommodative policies in order to try and equalize all these currency differentials,” he added.

How will central banks react to the Fed?
Boris Schlossberg, Managing Director at BK Asset Management believes the rest of G10 central banks will have to enforce accommodative policies to combat the lack of Fed tapering.

Speculation over the onset of a global currency war first came to a head at the start of the year when dramatic falls in the Japanese yenprompted widespread criticism from other world economies, amid concerns the yen’s weakness would put Japan’s exporters at an unfair advantage. However, the rhetoric abated after Japan was given the go-ahead to pursue its radical policies at a G20 meeting in April.

But the Fed’s decision on Thursday has reignited talk of a currency war, after thedollar index, which measures the greenback’s value against other major currencies slid to levels not seen since February at 80.06 on Wednesday.

Risk-on currencies got a boost; the Australian dollar rallied above the $0.95 handle in Asia on Thursday, a high not seen since mid-June, while the sterling surged to around $1.61, its highest level since January, and the euro reached highs not seen since February of around $1.35.

“All major pairs with the U.S. dollar are running hot, with AUD/USD the strongest performer up 1.8% in the U.S. session and EUR/USD not far behind. This does raise the question, what will be the responses from other central banks?” he said.

Lucas pointed to the Reserve Bank of Australia, which is broadly expected to cut interest rates again by year end, as one of the next likely movers.

(Read more: No taper! Did Bernanke fool the Street?)

“It also raises questions about the Bank of Japan,” said Lucas. “The fall in the USD is dire to its stimulus plans for the yen and the broader Japanese economy. Will the Bank have to intervene again? Will the three arrows be ramped up?”

The dollar-yen isn’t buckling as much as other currencies; that’s a sign that the market expects the Bank of Japan to be the first to try to offset the Fed’s move with a move of its own, he said.

The yen strengthened to 97.75 to the dollar following the Fed announcement on Wednesday, but had weakened back to around 98.10 to the dollar in early Asian trade on Thursday.

Schlossberg also highlighted the Bank of England as another central bank likely to respond to the Fed’s move.

“Someone wrote a very clever line today saying that the BOE didn’t realize it was in a quantitative easing war and now it’s going to have to [head] back into battle,” he said. 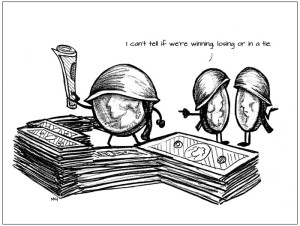 THE BANKER TAPER CIRCUS: The Greatest Show on Earth

The Most Frightening Takeaway From The Historic Fed Decision

Schiff: The Taper That Wasn’t