The All-Time Longest Filibuster Ever Was….. 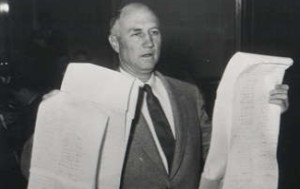 The distinction goes to the late Strom Thurmond of South Carolina, who filibustered the Civil Rights Act of 1957 for a whopping 24 hours and 18 minutes.

On August 28 at 8:54 PM, Thurmond began a filibuster during which he read the Declaration of Independence, the Bill of Rights, President George Washington’s Farewell address, and other historical documents. There is no record of Thurmond reciting any tweets of support he may have received.

Thurmond lasted until 9:12 PM the next day. In total, multiple senators succeeded in delaying passage for 57 days.

← This Is Why The Price Of Gold Is Now Set To Super-Surge
Peter Boockvar: “There Is 0% Chance That This Ends Smoothly” →