Gold and silver prices rose and then fell on news from the Federal Reserve last week and this process is likely to both continue and intensify now that the central bank has surprised markets by delaying the start of tapering its $85 billion per month money printing effort. After the Fed policy decision was announced on Wednesday, the gold price saw its biggest one-day move higher since June 2009, but most of those gains were given back on Friday when a central bank official suggested that tapering could come as soon as next month.

One consequence of the Fed’s newly dovish outlook was a much weaker dollar and this could play a key role in how precious metals trade in the period ahead since these two assets often move in opposite directions. A government shut-down looms on October 1st and the debt ceiling must be raised just weeks later, so there is a possibility of a late-2011 style loss of confidence in Washington lawmakers that could lead to a loss of confidence in the U.S. currency. As was the case two years ago, this could roil financial markets in 2013, but boost precious metals.

After last week’s big moves, the outlook for precious metals is more uncertain than it’s been for many months and at least one prominent investment bank has cited the combination of a weak dollar and near-term U.S. debt concerns as possible catalysts for higher metal prices this fall. But, one aspect about this market now seems clear – volatility has returned.

The Federal Reserve said on Wednesday it would wait for more evidence of improvement in the U.S. economy before beginning to rein in its asset purchase program and, in the hours that followed, this sent the gold price up nearly $60 an ounce and silver jumped almost 10 percent. Some analysts noted that this move higher was largely short-covering rather than the much more bullish development of establishing new long positions, and this view was lent a good deal of credence when metal prices plunged two days later.

The move down on Friday was prompted by St. Louis Fed President James Bullard who said the central bank decision was a “close call” and that the Fed could begin to scale back its bond buying program in October if incoming data point to an improving economy. After gold and silver were little changed on Thursday while traders digested the surprise decision by the Fed, it seemed markets were looking for a catalyst to prompt a reversal and Bullard’s comments filled the bill.

As shown below via StockCharts, after the prior week’s big move down, the two outsized moves on Wednesday and Friday have ushered in a new period of heightened volatility following months of relative calm. 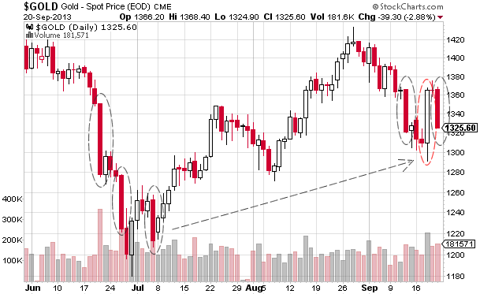 Read the rest of the article at Seeking Alpha.

Gold surges most since 2009 as Fed keeps stimulus in place.

Gold and Silver Outperform Everything as Fed Keeps QE Unchanged

Yes No Yes, Is The Fed Playing Games?