Most people can’t begin to comprehend how much a trillion dollars is.

Money printing or QE as the Fed likes to call it has reached levels that bring back visions of the Weimar Republic and unlike the average citizen, the Fed has no problem dealing with dollars in the trillions.

Money printing by the Federal Reserve has gotten so out of hand that within four short years (probably less) the amount of dollars conjured out of thin air will exceed the value of all gold ever mined in human history.

The world’s entire gold stock is about 170,000 metric tons currently valued at about $7.7 trillion.  The Fed is currently holding $3.7 trillion of securities purchased with printed money and the run rate of $85 billion per month weighs in at another $1.02 trillion dollars per year.  If the economy tanks, expect the monthly money printing to really ramp up. 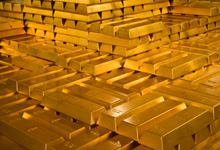 Fed’s money printing to date stands at $3.7 trillion.  Another four years of money printing at the current rate would pile up another $4.1 trillion for a total of $7.8 trillion printed dollars compared to the value of all gold at $7.7 trillion.

When all of this starts to sink into the public consciousness, the safe bet is that people will start to avoid dollars (which the Fed is manufacturing in almost unlimited quantities) and turn to gold which has been used as a currency and store of value since the dawn of human history.  Another safe bet is to ignore short term price corrections in gold and use the opportunity to increase positions.

Jim Rickards: We’re Witnessing One of the Greatest Failed Experiments in Economic History

“The Bigger Picture For The West Is Very Grim Indeed”