On Friday morning, gold trading was shut down for 10 seconds in a “stop logic” event, as the CME explains. In essence, when there is an overload of orders that cleans out stops, the market halts, [10 seconds???] “designed to prevent exaggerated price movements.” In a sorry-ass explanation that defies common sense, except to protect the criminal exchange behavior, we give this CME propaganda no further consideration.

Here it is in picture format on a 1 minute chart.

Who would do such a thing?

“Someone” sold 2 million oz of paper contracts at one time. There does not seem to be much interest by the exchange, and none by I-cannot-find-any-wrongdoing-Department- of-Justice-head-Eric Himpton Holder as to who was [ir]responsible for what would be considered an act of terrorism were it against the FX “dollar” or Fed-driven stock market.

Smart money does what it can to hide its accumulation, when in a buying campaign, or distribution when engaged in a selling campaign. Smart money would not do such a thing.

A prudent investor employs capital preservation tools and would not do such a thing.

The average trader is too poor to own 2,000,000 oz of gold so could not do such a thing. No liquidation margin call, here.

What about dumb money?

Who represents dumb money? Why central bankers, of course, and they are on a suicide mission to destroy the financial economy in order to save their fiat [out of]control.

Guess which country is the largest holder of toxic and worthless US Treasury Bonds?

China is still pissed at the U S government for selling out China’s gold, [on loan, but sold out from under them, anyway], back in the 1990s. As the holder of over a $trillion in US T-Bonds that are proving worthless, China is a Tiger getting rid of that paper.

This commentary is a partial answer to the manipulated raids in the gold market since last April. Those raids may be hurting the Precious Metals, [PM] game players, weakening their confidence and “disproving” gold’s worth against a fiat currency, but they serve a greater purpose, as in Federal Reserve payback time to China.

Few will ever know the true picture, but here is a plausible scenario. It is a generally held view that central bankers have emptied their vaults of all their gold, and not just their own holdings. Through hypothecation, rehypothecation, and who knows what more, central bankers have also sold every other country’s gold on loan. German gold: Kaput! Allocated gold from wealthy private holders: Gone! [No! You cannot see your gold that we hold for you in our bank.] [We stole it.] Where did it all go? Shipped East.

What about all that sovereign and private allocated gold that has numbers on each bar? So sorry. It was melted down, [accidents do happen], and remolded into bars and shipped to China. Why do you keep asking these unnecessary questions?

So why the manipulated gold raids?

It is a way to get the price of gold lower as a favor to the Chinese who are doing almost all of the buying to compensate for the worth less and less Treasury Bonds they are holding. If the central bank Fed does this for them, the Chinese will not dump all their holdings and cause the Western banking system to collapse. Instead, the greedy-but-dumb central bank Fed will cause the collapse of the US Federal Reserve Note, [also incorrectly called the “dollar,” along with the rest of the US economy, but at a relatively slower pace.

Forget about all these stories of long lines to buy gold, record sales in coin purchases, a pittance in comparison to the thousands of tonnes Chine, Russia, and a few others are buying at lower and lower prices, courtesy of the deceiving Fed, caught with its goldenless pants down. The game is up, and the Fed has chosen a slower death dance by increased money printing and QE-ScrewYou4Ever antics to buy time.

What does this mean for you? Got gold? Got silver? If not, you got nothing.

All paper-dominated “things,” for we cannot call them assets, except in the minds of the holders, have little to no intrinsic “value.” Despite the detractors who always to say gold and silver are not forms of wealth, both PMs are immune from government fiat dictates. Gold and silver are the equivalent of a wooden stake to drive into the central banker’s fiat heart, if they had one.

It is gold and silver that is the nemesis of all central bankers, for PMs would break the fiat paper back of their control. Why do you think the Federal Reserve was created 100 years ago by the New World Order? To get rid of the gold/silver specie backing of United States Notes and replaced with no-backing-whatsoever Federal Reserve Notes, as the means for stealing the entire wealth of the United States, forcing the country into bankruptcy in 1933, and turning the US into the Third World-rate country it has become.

Each and every week we advocate buying physical gold and silver, at any price. Just get it and hold it personally. Buying physical PMs is not an investment; they are necessary for your survival. Their ownership is the only way to avoid total bank/government control. The problem with land it that is not portable, and it can be more easily confiscated than gold and silver. They are the best means of preserving that which is yours. They are an insulation from bank bail-ins, [Why anyone still keeps money in any bank is a mystery.]

The gold and silver that you own and hold will escape the likely conversion of pension accounts, 401ks, etc, to be “taken,” as in theft, by the government, for your own good, of course, and converted into [worthless] government bonds.

Do you want to control your own life and financial destiny? The choice is yours. Your self-liberation is simply choosing to buy and hold as much gold and silver as you can. You have no third-party counter-risk. There is no debasement – an ounce of gold or silver is the same as it was for the past 4,782 years. [Why always 5,000 years?]

You are an eye-witness to the Western banking cartel’s self-destruction.

As always, we provide a chart or two that shows there is no panic that the decline in PMs has run it course and will run higher. One more thing: just as you see these waterfall drops in price, there will come a day when that effect will reverse, and those who waited “for the right time or a better price,” will be left holding their worth-considerably-less fiats.

There is no evidence of a turnaround on the daily. Gold closed at a support level, labeled as “important,” but it is what it is, and we get to deal with its breach or holding. For now, it is holding tenuously. That price is holding well above the lower reverse trend line is a plus.

Support is an area, and not just a single price, so as long as gold holds support either way is all that matters. Volume increased on a wide range bar and lower close. Every part of that supports sellers in control. Results will confirm or reject that, next week, and by waiting for the market to make that determination, there is no reason to buy futures. 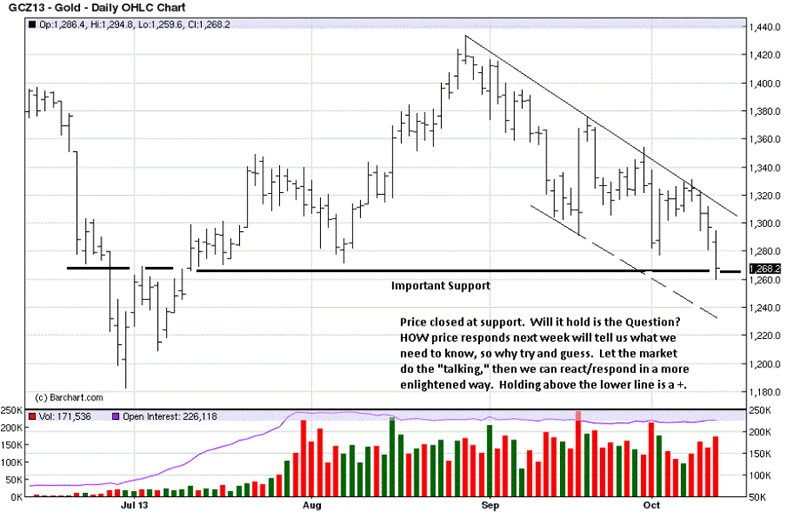 Silver held above its last swing low where gold did not. The gap support remains intact, but not in gold. There is also a potential higher swing low. If it holds, and silver can rally above 22.50, the daily trend will turn back up from a key price level.

Keep buying as much physical as you can, and hold it personally. Plus, do not tell anyone. 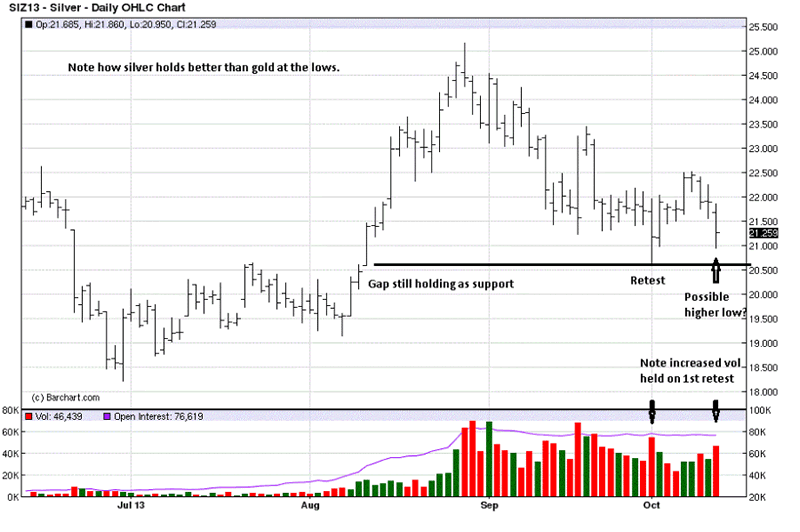 Michael Noonan, mn@edgetraderplus.com, is a Chicago-based trader with over 30 years in the business. His sole approach to analysis is derived from developing market pattern behavior, found in the form of Price, Volume, and Time, and it is generated from the best source possible, the market itself.

© 2013 Copyright Michael Noonan – All Rights Reserved Disclaimer: The above is a matter of opinion provided for general information purposes only and is not intended as investment advice. Information and analysis above are derived from sources and utilising methods believed to be reliable, but we cannot accept responsibility for any losses you may incur as a result of this analysis. Individuals should consult with their personal financial advisors.

Gold And Silver – All Eyes On Gold And China When Silver Could Be The Tipping Point.

Gold And Silver – When Fundamentals Fail And Charts Prevail