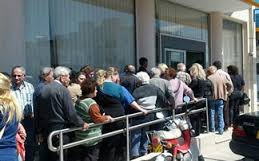 Will we see Cyprus style lines at US banks?

Banks across the United States are gearing up for a possible panicked run to withdraw funds as the October 17th debt ceiling deadline draws near. This according to an FT article published just hours ago.

US banks have been stocking cash machines with extra funds to satisfy any consumer panic in the days before a possible default.

Three of the country’s top-10 banks said they were putting into place a “playbook” last used in August 2011 when the government last came close to breaching the debt ceiling. A partial government shutdown began this week as Congress failed to agree on a spending bill.

Also it was noted,

US deposits of up to $250,000 are guaranteed by the Federal Deposit Insurance Corporation but previous severe market disruption – notably during the financial crisis – led to significant withdrawals regardless of the government’s guarantee.

According to the article, an employee of a second large bank said “it was also increasing deliveries of cash” when asked:

“Do you have cash on hand in your vault? That’s a consideration,” he said. 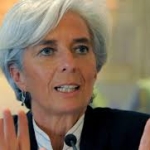 On Thursday, Christine Lagarde, managing director of the International Monetary Fund made the following statement:

“The government shutdown is bad enough, but failure to raise the debt ceiling would be far worse,”

All this comes after the US Treasury released a rather ominous statement on Thursday:

“A default would be unprecedented and has the potential to be catastrophic: credit markets could freeze, the value of the dollar could plummet, U.S. interest rates could skyrocket, the negative spillovers could reverberate around the world, and there might be a financial crisis and recession that could echo the events of 2008 or worse.”

In the midst of the current government shutdown, one wonders if the public will lose faith in the politicians ability to hammer out a deal before the October 17th debt-default deadline, thus justifying the bank’s worst fears.

Jim Rickards: Oct. 17 Is A Phony Deadline For Default