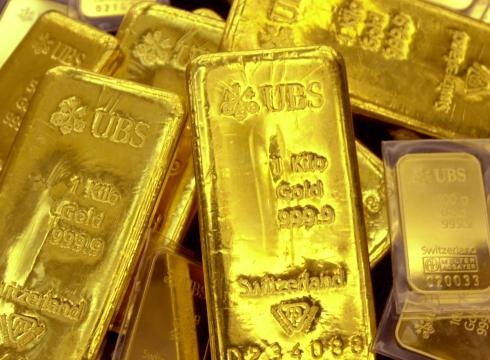 Gold futures are tumbling amid concerns about dysfunction in Washington and the government shutdown, while stocks and bonds seem to be largely ignoring it.

The dollar also fell, touching an eight-month low as buyers moved into euros and other currencies. Stocks were higher and bond prices were lower, with Treasury yields edging slightly higher.

Gold futures fell sharply after at least one major seller triggered a decline that drove the metal through key technical levels on huge volume, analysts said. The December gold futures contract was down about 2.6 percent, to $1,292 per troy ounce in late morning trading. Silver also skidded, losing more than 4 percent.

“Around 8:40 [a.m.] when the bottom really came out of the metal, a billion dollars worth traded in the futures pit over a 10-minute period. I think a fair amount of it was stop losses when it took out the September low, and once it hit $1,300, it took out more,” said Dave Lutz, head of ETF trading and strategy at Stifel Nicolaus.

There was also market speculation about one major fund that was rebalancing as the fourth quarter begins.

“Technical chart points were hit. The second thing is clearly the shutting down of the government, and it’s probably going to be another week at least that they remain out. That is always going to be viewed as deflationary, a contraction within the economy,” said Dennis Gartman, publisher of the Gartman Letter.

“We saw support down at $1,300, but it doesn’t seem to beholding,” said Wen, adding that an issue is also a lack of liquidity with major buyer China out of the market because of the Golden Week holiday. The other major buyer, India, has been less active because of the weakened rupee and tariffs on gold imposed by the Indian government.

Kevin Grady, president of Phoenix Futures and Options, said there were signs of at least one very aggressive seller on the futures market open at 8:20 a.m. EDT.

“Open interest was up 5,000 contracts from Friday’s trading,” he said. “I just think with everything that was going on here ahead of the shutdown and because of the debt ceiling issue, some people may have come in and said ‘I want to be long going into this,’ and I think the longs just got trapped.”

“It’s really what’s going on with the dollar. I think the debt ceiling issue is a lot more relevant. I think people think this [shutdown] is a short-term situation that will be dealt with,” Grady said. “People don’t want that for the debt ceiling. The markets do not like uncertainty.”

Read the full article at CNBC

Flight to Gold – The Street