The Real “Pin” That Could Pop the Stock Bubble 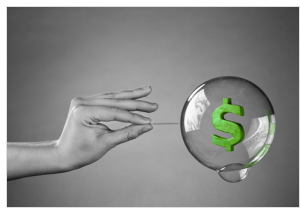 Nothing goes up forever. Not the Federal Reserve‘s balance sheet, not global debt levels, and not stock markets… even when governments don’t shut down.

Precisely because the Fed’s balance sheet ballooned from $869 billion in August 2007 to over $3.6 trillion (and counting) today, and in spite of ballooning U.S. and global debt levels, U.S. equity benchmarks have been inflated to precarious heights.

“Houston, we have a bubble.”

While the sky-high Fed balance sheet and rising global debt levels are their own bubbles, when they diverge – meaning, when the Fed starts to taper as global debt inflates – look out.

If the Fed-induced pump priming of financial assets isn’t backstopped by strong and real global GDP growth, the increasing debt burden of the world’s citizens will act as the ultimate pinprick that explodes the United States’ inflated financial assets bubble… and other global bubbles.

So here’s what’s really happening, how to prepare for the eventual correction (or possible crash), and – more importantly – how to make money from it…

The credit crisis that crescendoed in the autumn of 2008 was called a “credit crisis” because banks stopped lending overnight to each other, and short-term financing markets effectively shut down. There was no credit.

The Fed had to intervene and aggressively lubricate seized-up liquidity conduits, not just for banks, but for insurance companies, money markets, and corporations. And not just here in the United States. The Fed facilitated massive global liquidity vis-à-vis currency swaps and other dollar liquidity mechanisms.

The Fed, having the biggest capacity to expand its balance sheet (given the de-facto backing of the U.S. government and American taxpayers), took the lead, and central banks around the globe stimulated with gusto.

Because the credit crisis morphed into the Great Recession, the Fed, in the face of a dysfunctional and denuded American Congress, continued a zero-interest-rate policy (on overnight and short-term loans) to flush banks with cash in an articulated “wealth effect” policy aimed to pump up financial assets.

The wealth effect is a project to elevate devastated pension and retirement funds and invigorate consumer confidence by virtue of a rising stock market.

By pushing investors out of low-yielding fixed-income assets and into equity assets, the Fed engineered a rising stock market. Record-low interest rates further invigorated the stock market, as corporations have been able to borrow cheaply in the bond market to mainly execute stock buyback programs, lifting their own shares and the market to boot.

According to some estimates, as much as 40% of the rise in stocks over the past three years can be directly attributed to share buybacks funded by bond-market borrowing.

We have the Fed to thank for all that. But now we have the problem that markets, drunk with the Fed’s Kool-Aid, are facing the prospect of the punchbowl being removed.

And it’s a very big “problem.”

How to Prepare for “The Mother of All Bubbles”

The Greatest Debt Crisis The World Has Ever Seen Is Coming

The Smell of Collapse is in the Air

← Government Workers Told Not To Work On “Any Projects, Tasks, Activities Or Respond To Emails Or Voicemails”
Tweet From Chuck Woolery →