Rowdy Roddy Piper Admits “They Live” Was Actually a Documentary 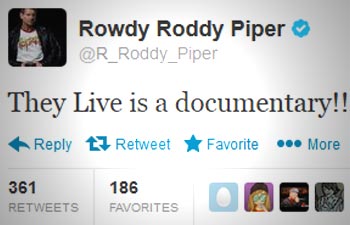 Remember the movie They Live? It’s the 1988 John Carpenter film about a group of elite aliens that control human beings on Earth through a TV signal that keeps people subdued with messages to obey government, consume and stay asleep like good little sheeple.

A drifter realizes what’s up by looking through the Hoffman sunglasses and seeing the true from of these alien controllers and their brainwashing campaign for what it really is. Tagline: “They live, we sleep.”

For 1988, the movie even had flying taser drones. So basically it’s a lot like America today (except the lizard alien part, which is debatable depending on who you ask).

Wrestler Rowdy Roddy Piper played the drifter in that film, and recently he announced on his Twitter account that They Live actually wasn’t a work of fiction, but a documentary.

Directly preceding this announcement was a flurry of pro-Second Amendment tweets in direct reference to a key line in the film where the drifter walks into a bank wearing those sunglasses and says, “I have come here to chew bubble gum and kick ass…and I’m all out of bubble gum.” 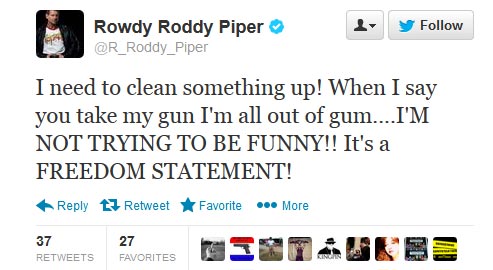 Those of us who consider ourselves ‘awake’ to America’s descent into a total police state dictatorship understand these references all too well. Sadly, it can be tough to watch They Live and not flinch at the fact that, on many levels, it hits very close to home (sort of the way a charming reality TV show would).

In fact, this video of subliminal messages hidden in a 1960s-era national anthem sign-off below shows the movie may hit a little too close to home:

Oh, and in case you are curious about what Roddy had to say regarding the government being shut down this week, here you go: 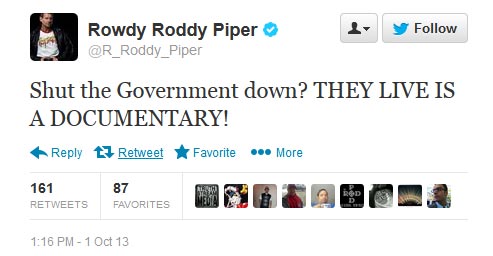 Delivered by The Daily Sheeple

Contributed by Melissa Melton of The Daily Sheeple.

Melissa Melton is a writer, researcher, and analyst for The Daily Sheeple and a co-creator of Truthstream Media. Wake the flock up!

Please share: Spread the word to sheeple far and wide

(Documentary) How The Economic Machine Works By Ray Dalio

One of a Kind: The Rise and Fall of Stu Ungar (Documentary)

← Government Shutdown Theater: Making Cuts That Will Cause the Maximum Pain for Dramatic Effect
David Morgan-Disruption or Currency Crisis Coming →