Gold & Silver; Running out of Steam?

Weak physical demand from China dominates the headline as traders continue to talk down the price of gold. Report from Reuters added that only demand should pick up if gold is trading in the range of $ 1250 to $ 1300 level. Gold started the week with sellers taking the yellow metal to a low of $ 1313.56 before buyers enter the market. Upbeat economic data from China also failed to lift the equity market. Silver faced heavier selling pressure to test $ 21.27 area before retracing back to $ 21.81 area. We are cautious as this is the end of September which could see more volatility in the market place as traders look to position themselves for October. Talks of tapering in October have once again reignited the Bear camp but most analysts felt that December carry higher probability. In our view, the October FOMC meeting might be used as a platform to announce who will replace Mr Bernanke and the new Chairman will then carry the first task of tapering in December. Meanwhile, the US debt ceiling is starting to heat up but most analysts view the extension of the ceiling is imminent. Given how fragile the current economy and government are, borrowing and money printing seems to be the way forward.

Read the rest of the article at Sharps Pixley. 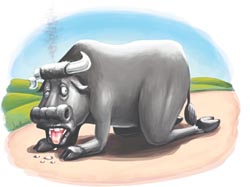 Yes No Yes, Is The Fed Playing Games?