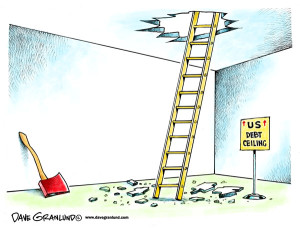 The WHOLESALE price of gold and other precious metals touched 4-session highs Thursday morning in London, after US Treasury secretary Jack Lew warned yesterday that the government will run out of money in just 3 weeks’ time if Congress doesn’t approve new debt.

World stock markets ticked lower with major government bonds as the US Dollar rose on the FX market.

Estimating that the Treasury will have only $30 billion in hand by that deadline, Lew said net expenditure can reach $60bn per day.

That’s equal to $191 for every member of the US population.

“If we have insufficient cash on hand,” says Lew, “it would be impossible for the United States of America to meet all of its obligations for the first time in our history.”

Analysts at ANZ Bank said in a note today that they expect headlines around the US debt debate “to drive” the gold price and other precious metals.

“Gold could receive something of a bid over the short-term,” says INTL FCStone’s Edward Meir, “as worries rise over the debt ceiling talks.

“But we doubt whether this variable alone will be enough to keep the complex elevated for long.”

Turning to US monetary policy, meantime, last week’s vote by the Federal Reserve to continue buying $85 billion of Treasury bonds through quantitative easing “will not only stem the rise in real yields,” says Deutsche Bank in a note, “but also remove important interest rate support for the US Dollar.

“On this basis, we expect this will introduce a strong floor…and may even provide some upside risks.”